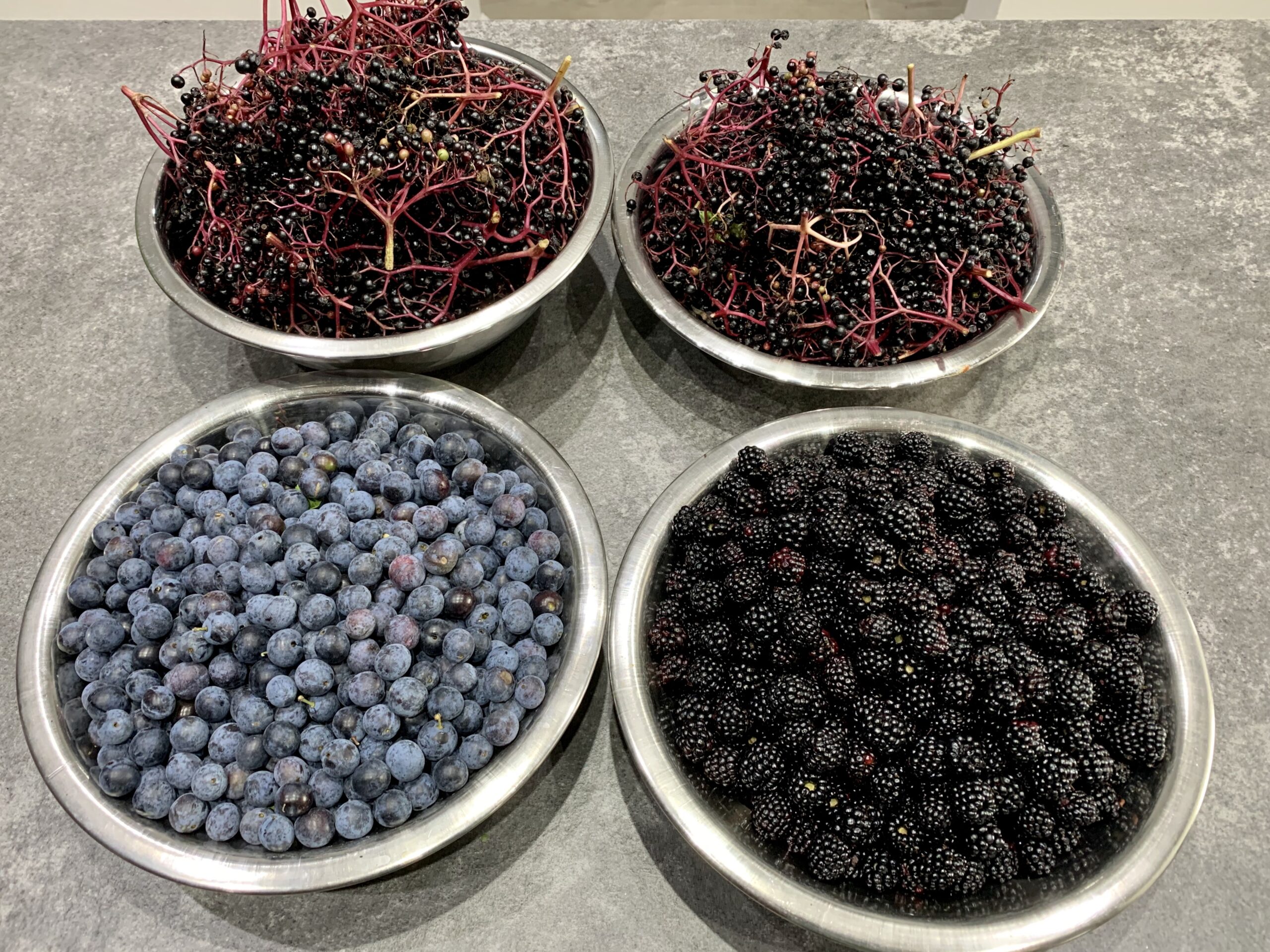 So Sunday just gone i decided to get up nice and early and head out to some local fields, that i,ve been keeping my eye on, with the intent to forage a few berries . As mentioned i have been walking these fields for a while now and have noticed numerous areas where i could pick some blackberries, elderberries and sloe berries, and have just been waiting for the fruits to ripen.

First on the list was the humble blackberry, and luckily there was two large patches of bramble bushes growing fairly close to each other. Within 20 minutes or so i had picked a good bag load and was pretty chuffed with myself. The berries were fairly small this year and i put this down to the lack of rain recently, up until last week we hadn’t had much rainfall for the past couple of months, but they pretty bountiful none the less.

Next up was the fruits of the Blackthorn Bush, otherwise known as Sloe Berries. Now there’s a narrow track that runs from where i park my van down to the actual fields themselves, roughly 250 yards long i guess and down one entire side of this track grows blackthorn bushes and they are covered in sloe berries. This makes for really easy picking so in next to no time i had a good haul of the little purply fruits. Before you ask, yes it is a bit early to harvest them but they felt quite soft and ripe already hence me gathering some now, and i will be picking more in the coming weeks.

Last on the list was the dark fruits from the Elder Bush, Elderberries. Now there is only two elder bushes in these fields so i was lucky to be able to harvest as many berries as i have. In fact one of the bushes was starting to over ripen already and the other wasn’t really ready to pick from just yet. It took a bit longer to get a good haul of these dark little beauties as i had to scramble through some bit old brambles to get to the best bunches. Luckily on my travels over the past couple of days i have founds a couple of elder bushes which are heavily laden with these little berries so i will out after them in the next day or so.

All in all i had maybe 2 hours out in the fields and managed to harvest around 1kg of each fruit which i am very happy about. They are nestling in my freezer now ready to be turned into some tasty goodies within the next week or so, when i get a bit more time, and ill post the recipes on here after i,ve donned the cooks apron………

These ducks and waders lifted from the marsh edge

The boys having a swim and fighting over a stick.

Nice little 4 mile walk along the banks of River R

I had a lovely little walk with the boys around Tw

A couple of mushrooms I found while walking the se

Not long back from a lovely little walk with boys

An odd looking Wood Blewit mushroom I found at Wak

A few ov the different mushrooms varieties that I

The boys enjoying a wee swim a few days ago. Paddy

Just posted a new recipe on my blog for Hawberry S

What do you reckon of the new logo guys?? #bryansc

A nice, but wet, walk this morning along the beach

A moody sky this morning just before the heavens o